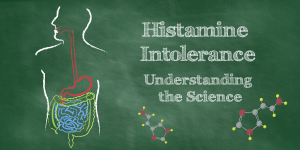 Many people turn to a wholefoods diet in a bid to manage a variety of health concerns such as irritable bowel syndrome (IBS), chronic sinusitis, anxiety, headaches or fatigue. However some find little improvement in their symptoms and some, in fact, may even get worse. They may also find certain medications prescribed to help with these issues may instead aggravate them, which can be extremely frustrating.

This is a scenario that often occurs for the many sufferers of histamine intolerance (HIT), a condition that is frequently misdiagnosed though one that is becoming more prevalent. Currently, it is thought that roughly 1% of the population could be histamine intolerant with approximately 80% of those affected being middle-aged, with females being more susceptible than males.

What is Histamine Intolerance?

HIT occurs when the body is unable to breakdown histamine effectively because of a defect in one of two enzymes – diamine oxidase (DAO) and histamine N-methyltransferase (HNMT). DAO is found in the intestine and is the primary enzyme for the metabolism of histamine in foods, while HNMT is the primary enzyme for the degradation of histamine in intracellular tissue, such as the bronchial epithelium. When DAO or HNMT enzyme activity is deficient, histamine is reabsorbed in the intestines and carried through the bloodstream in its active form, causing an excess of histamine in the body that results in an array of symptoms that can mimic an allergic reaction.

Unlike other food intolerance’s and allergies, the issue with HIT is cumulative. Reactions are not always immediate, as smaller amounts of histamine are unlikely to cause any negative effects, making the trigger difficult to pinpoint.

Symptoms may present differently from person to person and may present across multiple systems, with the digestive, respiratory, cardiac, and nervous systems being the most commonly affected. Some of the most prevalent symptoms of histamine intolerance include: 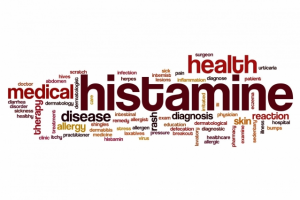 Factors that contribute to the onset of HIT are many and varied and may include:

How is HIT Diagnosed?

The gold standard approach for the diagnosis of HIT is a low histamine diet for one month, followed by slow reintroduction of medium to high histamine foods. If symptoms improve markedly during the elimination period, HIT is the likely diagnosis.

HIT testing has not been widely available in Australia and, until recently, very few laboratories offered anything but urine testing. More recently, blood tests have become available which assay IgG and IgE mediated food allergy and intolerance. In addition, genetic testing can provide information regarding any genetic defects associated with histamine metabolism that may be contributing to the condition.

Which foods Should be Avoided on a Histamine Diet?

Certain foods contain high levels of histamines while others have a histamine liberating effect. When undertaking a low histamine diet both groups of foods need to be avoided, given the result is essentially the same, being that excess histamines in the body causing a histamine reaction.

Leftovers can also cause an excessive reaction, as histamine content increases with the maturation of food.

Certain medications may also block DAO activity or liberate histamine, both of which will cause a histamine reaction. Examples include antidepressants, NSAIDs or radio-contrast agents used for x-rays.

Naturopathic Approach to the Treatment of HIT

The naturopathic approach to managing HIT considers the numerous contributing factors and suggested treatment may include:

TOP 5 THINGS TO KNOW ABOUT HIT